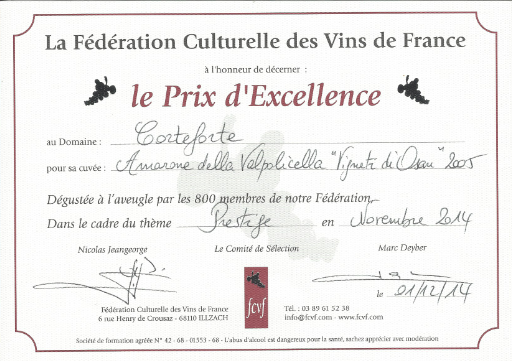 The Fédération Culturelle des Vins de France has awarded, with a blind tasting organized with the 800 members of the Federation, the prize of excellence to our Amarone della Valpolicella “Vigneti di Osan” 2005.

The award is extremely prestigious because the French Federation annually organizes the most prestigious wine tasting which includes wines from France, Spain and Italy. The commission is made up of professional sommeliers, chefs and winemakers.

Founded in May 1998 by Marc Deyber and Nicolas Jeangeorge, both driven by a passion for wine, the Federation of Cultural Wines of France now includes tasting clubs of the all France and headquartered in Alsace. In February 2007 has been acquired Restaurant La Closerie in Illzach in which the FCVF is located.